In this exhibition visitors are able to experience a new rendition of the notorious Scharf Schak. Originally built as a playful pop-up shop for small art products and memorabilia, this portable store opened viewers to a more accessible and commercial experience of the artist’s work.

As visitors enter the first of two spaces, they will encounter retail items for sale, echoing the origins of Kenny’s art practice and his previous Scharf Schaks. This shop installation includes pop art aesthetics that can both critique or embrace commercialism and its influence on the art production process.

As visitors enter the second space of the exhibition, they can experience a part of Kenny’s world that is more sequestered than his energetic painted spaces filled with frenzied characters. The curation of paintings, sculptures, prints, and a wall mural further contextualize Kenny’s store items as they both embody similar imagery and aesthetics. Viewers are able to ascend from one room to the next, going deeper into the mind of the artist while further blurring the line between art and commercial product. 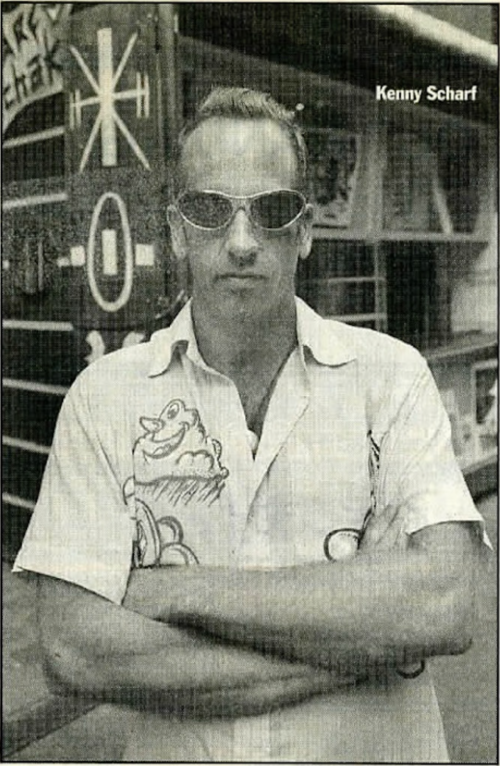 Kenny Scharf, who emerged on the New York art scene in the late Seventies at the same time as his friends Keith Haring and Jean-Michel Basquait, is now shacked up in an old new kiosk in SoHo. He’s painted it purple, red and yellow, given it a cartoon face, and dubbed it the Scharf Schak. This funky bit of real estate on Prince Street isn’t his Home – the artist lives in Miami – it’s his new shop, which he rents from Peter Brant (who also owns the building that houses the SoHo branch of the Guggenheim Museum), and it opened here last weekend.

“We have customized clothes – jeans and T-shirts,” says Scharf, who this day is a walking advertisement in a yellow vintage shirt he’s painted. “People can drop off any item of clothing they want customized, and I’ll do it.”

“There is no philosophical problem as far as I’m concerned,” the 36-year-old Scharf says as he sips a vegetable drink and walks through SoHo. “My number-one concern is no matter how mass produced it is, if that item looks good and I’m behind it, that’s all that matters. So, if there are 500,000 or just one, I don’t think it makes a difference.”

Scharf has recently been working on new product ideas for both the Schak and the Scharf Schop, which he opened in Miami seven months ago. In addition, he’s also been making art and raising two children with his wife, Tereza. Despite his hectic schedule, he managed to make time to appear in a film.

He was an extra in Julian Schnabel’s movie about Jean-Michel Basquiat.

“I did it for Julian,” Scharf says. “He’s been very generous with me, and I wanted to show him my gratitude for all the things he’s done for me. I give him a lot of credit for getting [the film] together, but I have some reservations about it. Julian’s involvement with Jean-Michel pretty much took place after Jean-Michel became famous, and my opinion is that the most exciting part of his life took place before he became famous.”

A number of films are being made about Scharf’s friends, and he’d like to make one too.

“I’m very interested in making a movie about Club 57 [a New York club where Scharf showed his work in the seventies]. I think it would be very interesting because a lot of the people are still around. The movie they’re making of the Valerie Solanos story [“I shot Andy Warhol”], I love it but all of the actors and the people doing it are much too young to know what really happened, so they can only conjecture what it must have been like.”

As Scharf walks from the Schak to the Tony Shafrazi Gallery in SoHo, where he’s represented, he’s greeted by many passersby. Once in the gallery, Yoko Ono peeks out from behind a column to say help. Laura Bailey, Richard Gere’s new girlfriend, also stops to talk to him.

“I think that people only really know me for my art,” says Scharf, who doesn’t want to exclude other forms of artistic expression from his repertoire. He’s already done performance art and, of course, he’d like to make films.

“I like to do many things,” says Scharf, “but I would never give up my painting.”

Kenny Scharf (American, b.1958) who lives and works in Los Angeles, is a painter and installation artist associated with the Lowbrow movement, and best known for work inspired by comic books and pop culture. Born in Los Angeles, CA, he studied at the School of Visual Arts in New York City, and became part of the East Village art scene during the 1980s. His early work, such as Judy on the Beach (1962) and The Flinstones (1962), was strongly influenced by Hanna Barbera cartoons, but he gradually began to transition to biomorphic imagery. In 1985, the Whitney Biennial featured Scharf’s black light installations, such as his Closet #7, and the painting When Worlds Collide (1984). At the end of the 1980s, he began a series of Glob paintings, which were inspired by Abstract Expressionism and Surrealism. Scharf’s most recent series of paintings, titled Naturafutura (2010), depicts abstract swirls of black paint, inspired by his studio in coastal Brazil and the BP oil spill. He has held solo exhibitions at the Museo de Arte Contemporaneo de Monterrey in Mexico, MoMA PS1 in New York, and the Pasadena Museum of Contemporary Art.